Coysh, A.W. and R.K. Henrywood: Bookmarkers,
Buckinghamshire, Great Britain: Shire Publications, 1994.  Shire Album 305. 31 p. ISBN 0747802548
​A bibliography of books about bookmarks, even an annotated one, could easily fit on a bookmark.  Not long after I realized I was a bookmark collector, I began collecting books and articles about them as well.  Although I now have over 1300 resources, only a few are books devoted to the subject.  The first full book I located is Collecting Bookmarkers by A. W. Coysh.

This 1974 book is the classic, most comprehensive history of bookmarks, although it focuses mainly on those produced in the UK and is based on Coysh’s personal collection with examples from about 1850 to the present.  He defines 19 categories based on time period, material, purpose (e.g., tourist souvenir, health and safey) or type of producer (e.g, insurance companies or publishers). The 1994 work is a little booklet with much of the same information, slightly updated, with a short bibliography on other works about bookmarks, collecting and ephemera.  This bibliography was instructive in suggesting that books on related topics should be consulted to learn about bookmarks as well.  Both works are difficult but not impossible to find at public libraries or out-of-print dealers.  They have good black-and-white illustrations with some in color on the covers.
​
​Although the 1974 book was an excellent reference source when I was first beginning to collect, its limitations are now more apparent if understandable.  The time periods are useful for identifying styles and subject matter typical of those eras, but the focus on British creators narrows the view.  Coysh also devotes attention to 19th and 20th century bookmarks since those are most accessible to collectors.  He does mention evidence of earlier bookmakers, citing the fringed silk bookmark presented to Queen Elizabeth in 1584 as one of the earliest examples.  Of course, there is documentation of bookmarks being used much earlier, so again, the British focus and Coysh’s own choices about what to include present a shorter time frame for exploration.  The examples he uses to illustrate bookmarks from different time periods have taken on importance simply because there are so few sources for documenting bookmarks.

I was thrilled to find an example of one of the first bookmarks I collected from B. H. Blackwell in Oxford.   And I have gone back to this source as I have added to my collection, both for clues in identifying time periods as well as for specific examples.  In looking at these books again for this review, I was pleasantly surprised to see several of my recent acquisitions listed.  Collectors often delight in finding comprehensive lists of bookmarks from creators or publishers, such as those produced for Stevengraphs, so that they can check off what they have obtained for their collections.  The Coysh book is not comprehensive in that way, but it can be a handy reference for checking off representative examples.

Other books on bookmarks produced in other countries have used a similar approach to describing bookmarks by period or type which makes it easier to compare across regions, as well as to see how bookmark production has differed.  Coysh remains the model for a good introduction, but there is still room for other approaches, more comprehensive lists, and especially works about bookmarks in other countries.
Building Your Own Bookmark Reference Library
A series of book reviews by Georg Hartong

These series of reviews are thought to be a helpful guidance for all bookmark collectors and others interested in bookmarks who wish to build their own reference library by choosing from published books on bookmarks.

Until the present day there exist no book containing the worldwide history of bookmarks and such a book will not be written unless a large team of writers/collectors will work together. One person can't cover the whole world.

Although bookmarks have been used from the very beginning of the codex form of books around two thousand years ago [1] the first book entirely devoted to bookmarks appeared as late as 1974! From then on more books on bookmarks were published, devoted to the bookmarks of one country mainly. Now are available monographs on bookmarks from the UK, The Netherlands, Germany, France, Italy, Spain and Japan.

It is really amazing that there is no monograph on bookmarks from USA, because the US have played an important role in the development of the loose, insertable paper/cardboard bookmark since about 1850.

Below we will review the monographs on bookmarks mentioned above. 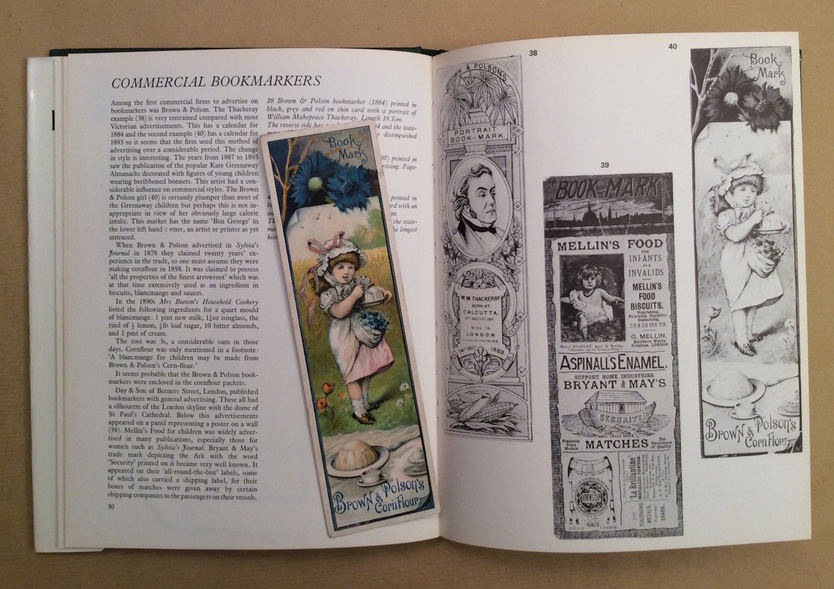 ​Bill Coysh based this book mainly on his own collection, consisting for the larger part of bookmarks from the UK. The title suggests a wider range, but: 'Collecting UK Bookmarkers' would have been a more suitable title.

In fact this book is dealing with UK-bookmarks from 1850 to 1970, describing materials and 19 categories of bookmarks, showing illustrations of many of them, unfortunately only in black/white.

Coysh deserves our credit, for being the first to publish a book entirely devoted to bookmarks, giving a - for the time being - nice survey of UK-bookmarks.

In 1994 an additional booklet was published: